SEMS are a bolt combination consisting of a single washer or multiple washers permanently attached. Originally, the term SEMS comes from The Illinois Tool Works Inc. company that manufactured machines that made preassembled screws and washers. However, SEMS is now recognized generally as a common term that applies to washer and screw assemblies. When it comes to pre-assemblies, lock washers are an integral component. At ITW Shakeproof Industrial, your premier SEMS washer manufacturer, we offer pre-assembled SEMS washers for secure connections.

The permanently fixed washer of SEMS screw and washer assemblies remains in place because it is installed on a blank bolt prior to thread rolling. The washer remains in place without becoming loose from the bolt because the threads are larger than the initial diameter.

With permanently attached washers in place, the potential of SEMS screws to fail due to missing washers is significantly reduced.

Also, it is easier to keep track of the logistics and inventory of washers and bolts or screws when they are attached together.

The disassembly of fasteners and washers is easier with SEMS washers and bolts/screws since there will be no loose washers stuck or trapped in tapped holes.

Regardless of whether you need a SEMS screw with square washer or other form of SEMS fastener and washer assembly, we have you covered at ITW Shakeproof Industrial.

Contact us today to learn more about the pre-assembled SEMS washers we offer for various industry applications. 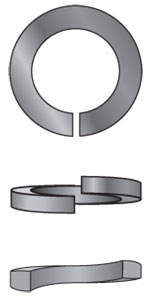